A common issue with ASTM D86 distillation tests is that gasoline samples are run immediately after Reid Vapor pressure tests while the sample is still at 0-1°C (32-34°F) and not at the specified temperature of 12-18°C (55- 65°F).

The problem occurs when the test results reflect abnormally high recoveries, for example 99.8% on winter blends of gasolines. The abnormally high results are often caused by charging at the wrong sample temperature (0- 1°C or 32-34°F) and collecting at a receiver chamber temperature of 12-18°C (55-65°F). Proper sample conditioning prevents these errors and faulty test results.

Because of this problem, Tamson presents the TLB50 D86 sample preparation bath for storage or conditioning below 10°C (50°F), as required for group 1 and group 2 samples. The TLB50 D86 bath is equipped with a levelling platform that offers space for up to 12 bottles of 1L each. Also, the TLB50 is equipped with bottle holders that prevent the floating and movement of bottles in the bath.

The TLB50 has an operating range of -5°C up to +80°C. The benchtop bath with integrated cooling can replace the combination of a water bath with an external cooling circulator. This not only saves bench space but also costs because of its high cooling efficiency. The primary use of the TLB50 is sample preparation. Before most samples are analysed they must be conditioned to a specified temperature as described in a test method.

The TLB50 can be used for any test method which require sample preparation prior to the test, like ASTM D323 (Reid Vapor pressure).

Tamson is manufacturing a CEC L-109-14 bath. The CEC L-109-14 test method covers the oxidation test for engine oils operating in the presence of biodiesel fuels. The Tamson CEC L-109-14 bath is a bath with all the accessories to perform tests according to CEC L-109-14. The apparatus consists of a six position TC40 circulator bath and it is standard delivered with six sets of glassware (500 mL flask and condenser).

Recently, we delivered the first bath in Indonesia. A complete test setup has been launched!

Please click the following link for our specification sheet: https://tamson-instruments.com/media/pdf/cec%20l-109-14.pdf

In 2017, Tamson introduced the Tamson Cool Cube (TCC), a multi-purpose cooling module. The first version of this unit (TCC-IC) uses an immersion probe (cold finger) to cool down fluids such as methanol, ethanol or silicon oil to temperatures of -80°C.
Tamson Instruments is proud to announce the next apparatus based on the Tamson Cool Cube. The TCC-B is a cooling circulator with an 11 L bath volume. The minimum operating temperature is down to -88⁰C. The cool down time is very efficient as -80⁰C can be reached within 70 minutes after starting the bath at ambient temperature. The apparatus is standard equipped with a performance pump (16 L/min, max 1 Bar pressure) to circulate the bath fluid to an external application. The user can adjust the pomp speed according to the requirements using the control knob located on the front panel. The upper plate of the TCC-B is heated preventing the built up of ice. The lid is well insulated, preventing water drops from entering the bath when opening the lid which happens with other major brands in the market. Water drops can become ice inside the bath, damaging the apparatus. For all TCC-B details, please download the specification sheet. The TCC-B is now commercially available and it will replace the TLC80-14 and TLC90-14. Tamson will stop the production of the TLC80-14 and TLC90-14 at the end of 2019.
After this date, Tamson will only be able to deliver remaining stock. The price of the TCC-B will be the same as the TLC80-14. Compared to the TLC80-14, the TCC-B was upgraded with the following advantages:
• Smaller dimensions, saving space in the laboratory.
• Slightly smaller bath volume, requiring less bath fluid.
• Standard included with a performance pump offering 16L/min, one Bar pressure, as compared to 10L/min, 0.3 Bar with the TLC80-14.
• Variable pump speed (flow). Adjustment using a control knob located on the front panel.
• Significantly improved heat removal capacity. Heat removal is around 300 Watts at -80⁰C, while the TLC80-14 offered a heat removal of 50 Watts at that temperature.
• TCC-B is equipped with a status panel which informs the user about the status of the compressors and overpressure safeties
• TCC-B is a quieter instrument
In summary, for the same price the TCC-B is a better product compared to the TLC80-14 and TLC90-14. In case you have pending projects for the TLC80/90-14, please consult the situation with your customer.
Tamson will also amend the specification sheets for ASTM D97 and ASTM D1177 where the TLC80-14 will be replaced by the TCC-B. In case of questions, please contact our sales team (sales@tamson.nl).

Tamson is proud to announce a new video on our ASTM D1298 apparatus.

Our ASTM D1298 apparatus is an excelent solution for the measurement of density by hydrometer. Because of the jacketed cylinders, the entire hydrometer is clearly visible, and the sample is at the correct temperature. Petroleum measurement tables are not longer needed.

Please see the video by clicking on the following link: https://youtu.be/mpDCIgktBX4

If you want more information on our ASTM D1298 system, please contact our sales staff at sales@tamson.nl

Tamson is happy to announce that we are able to supply a non-hazardous verification fluid for filter blocking tendency tests. The Tamson Filter Blocking Tendency (FBT) verification fluid is used for checking calibration of the Tamson Filter Blocking Tendency Tester (TFBT), including verification of filters, according to IP 387/ASTM D2068 Procedure B and as referenced in IP PM-EA and CEN N403. The methods recommend use of a certified verification fluid with a nominal FBT = 2.00, a certificate stating the precise value is supplied with the verification material. This certified FBT value and the mean test conditions values are the means of replicate measurements made using a Master Filter Blocking Tendency Instrument in accordance with IP 387 Procedure B and ASTM D-2068 Procedure B. Certificate of analysis is standard included. Traceability to the SI Units and the ITS-90 Temperature Scale is provided for the volume, pressure, temperature and timing measurements via instrument calibration to National and International Standards. Volume of the bottle is 500 mL. A non-diesel based formulation is used for this verification fluid, providing an excellent stability of the sample.

Tamson is proud to have built two more TV7000LT baths. Those precision instruments will be used in metrological institutes in China and in Uzbekistan.
Both baths will be used for calibration purposes at sub-zero temperatures.On the picture below, the baths have just been tested. 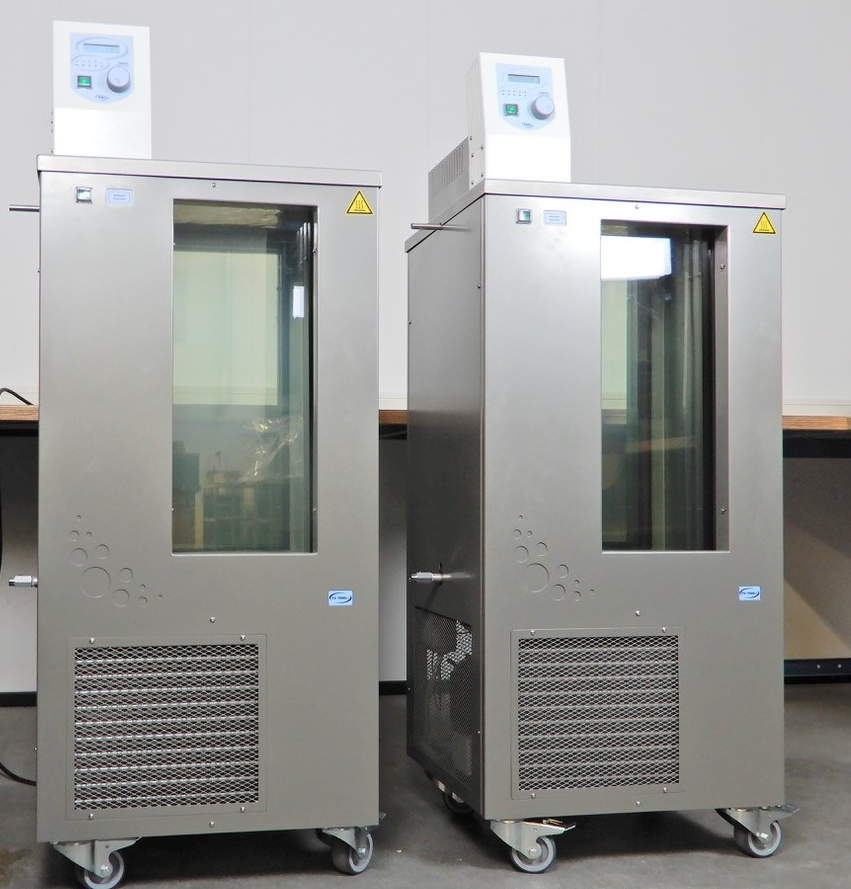 The history of the TV7000LT goes back many years. In the early seventies a similar system was made by Tamson with a built-in cooling system.
The temperature control was based on a mercury contact thermometer and the refrigeration on an off-shelf conventional cooling system. This design resulted in this big apparatus.
In this apparatus, you will see a high temperature viscosity bath standing on the cooling unit. Back in the seventies, temperature control was still done by using the mercury contact thermometers, instead of the PT100s that became in use later. 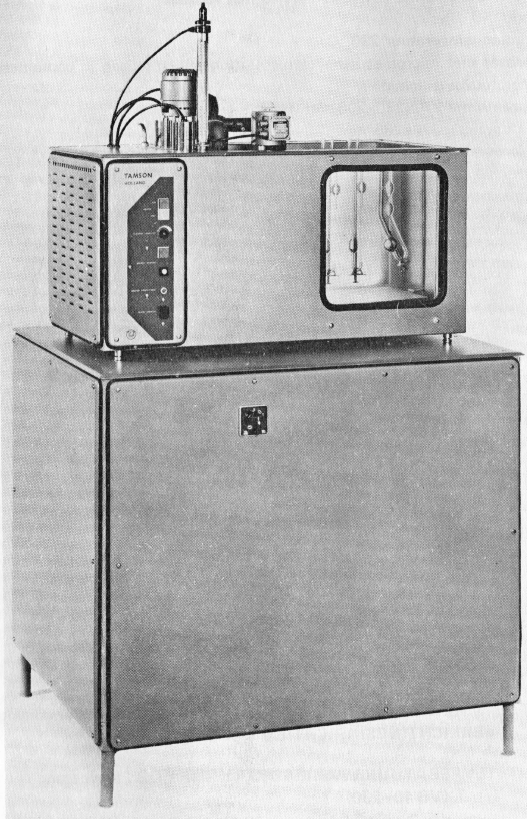 The minimum temperature was restricted to -20 degrees Centigrade and the immersion depth dept was limited to 300mm. In 2005 a new system was developed upon request for the French national laboratory in Paris.
This unit was based on a TV7000 system and with 600mm it doubled the original immersion depth. This new bath was called the TV7000LT  TV stands for Tamson Visibility bath, 7000 to indicate a volume of 70 Liters, and LT stands for Low Temperature.
This bath more looks like the bath we produce nowadays. 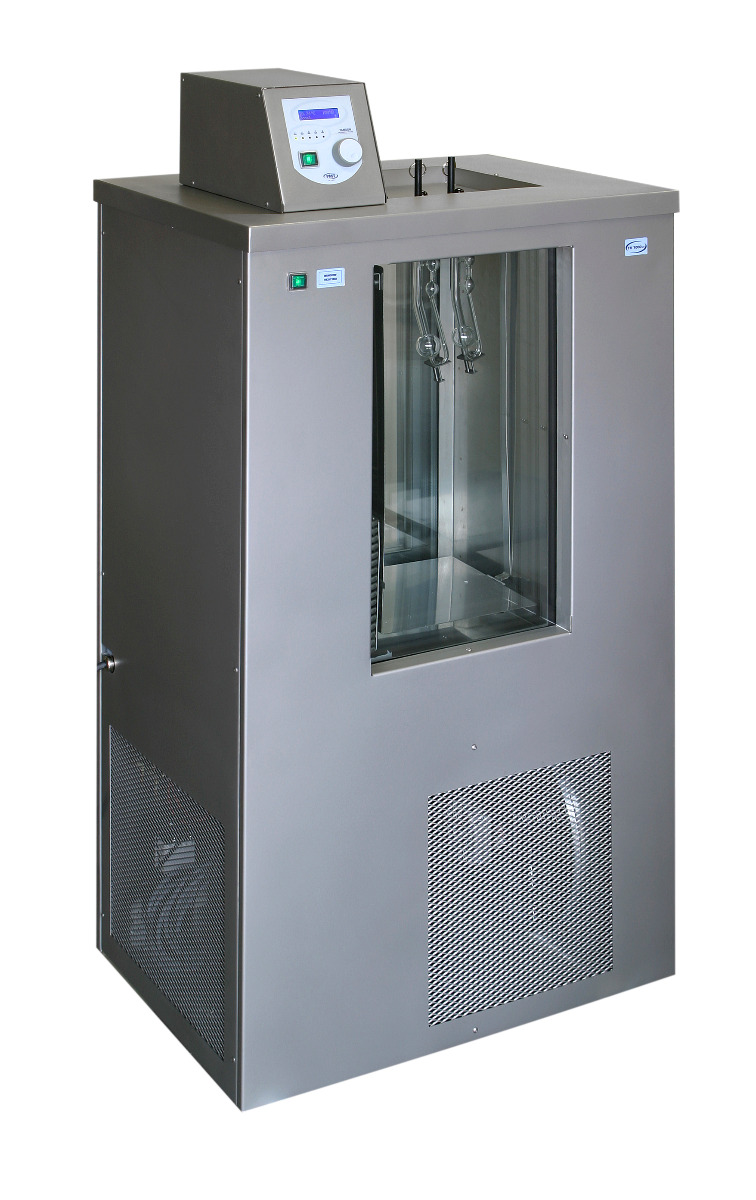 The cooling system was redesigned to reduce the energy consumption significantly. The cooling system is based on a two mode principle, where the cooling down of the bath goes fast, and once the bath reaches the setpoint temperature, it switches to a mode where less power is used.
It also enables the use of the bath over a much wider temperature range, ranging from -40 up to +100 degrees Centigrade. However, when using the TV7000LT at a wide range, you have to consider the bath fluid that you are using.
For temperatures down to minus 20 water glycol mixtures are popular. For lower temperatures ethanol (or methanol) can be used. When working close to 100 degrees Celsius, silicon oil has to be used, because water does evaporate.
The TV7000LT offers excellent temperature stability. This makes it a good solution for all kind of calibration purposes, such as the calibration of viscometers conform ASTM D2162.
Interested in a TV7000LT? Please contact your local Tamson dealer, or our sales staff at sales@tamson.nl
Read More Posted in: News
By Roy van den Berg December 19, 2018 186 Views

Please see our winter newsletter below. In this newsletter, two new products are announced, the Tamson Freezing Point Tester and the Total Sediment Tester. Both products can be found on the website and in our price list.

For more information on these products, please contact our sales staff at sales@tamson.nl

The entire Tamson team wishes you a Merry Christmas and a Happy New Year!